What slows your network down?

The weakened signal or WiFi dead spots could be the result of physical obstructions. Simple things like the floor, doors and walls of your home can come between you and your router, especially if they’re made of metal, brick, or concrete. Or maybe your home is too big for a traditional router, and it is only capable of reaching as far as the kitchen, but not to the backyard, the garage, or a distant bedroom.

Interference from other devices such as the microwave, cordless phone, or baby monitor could only worsen the situation. Worse still, if you live in close quarters with other WiFi networks and devices— say, an apartment complex—the problem increases tenfold. This scenario would be like having a room full of people who are all speaking at once where nobody’s going to be heard very well.

What is Mesh WiFi?

Mesh WiFi is a network of WiFi access points, built to eliminate dead zones and provide uninterrupted WiFi throughout your home. Mesh WiFi systems include a router that connects directly to your modem for Internet connectivity, called “Gateway”, and a series of satellite modules called “nodes,” placed around the house for full WiFi coverage. They form an area of blanket connectivity – the mesh – where all devices work together to create a unified WiFi network. 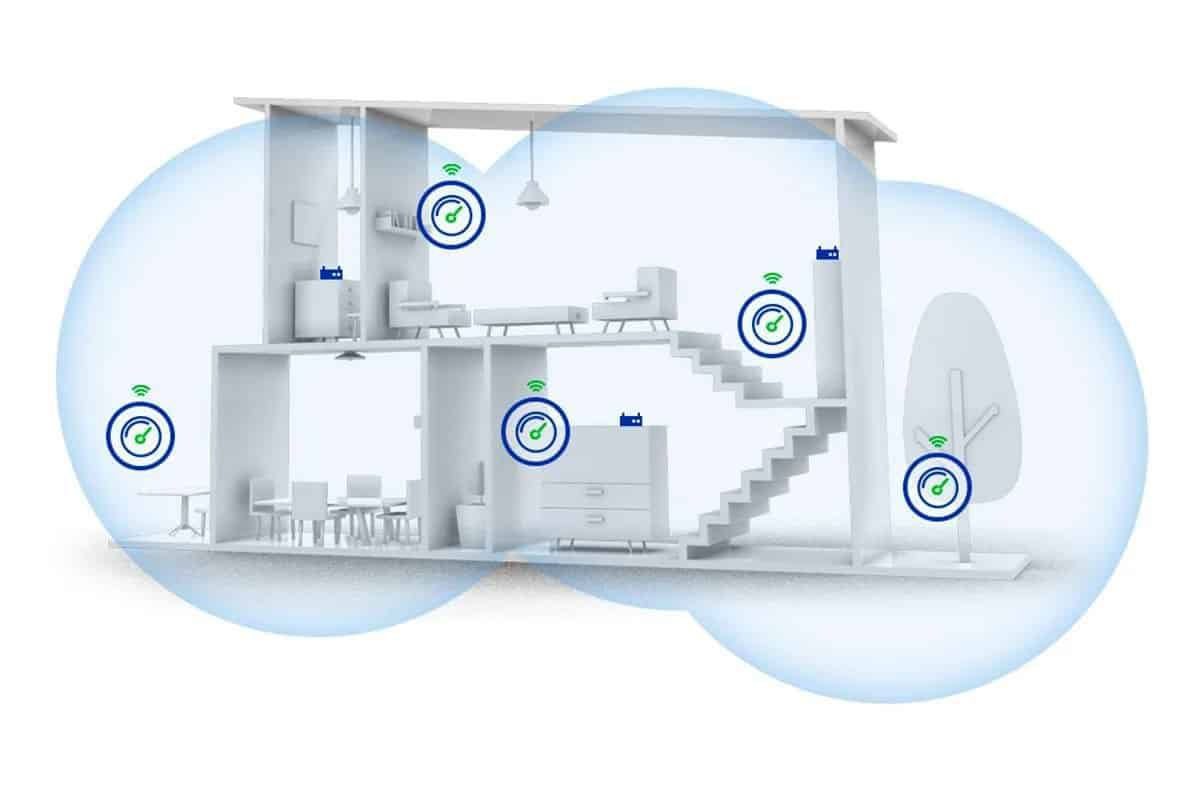 Mesh routers enable devices in your network to have faster speeds, increased coverage, and a more reliable connection. While traditional routers broadcast WiFi from a single point, mesh WiFi systems have multiple access points. Let’s dig a bit deeper into what makes mesh WiFi stand out.

Blanketing your home with WiFi

Imagine a standard router to be a speaker. The music would be loud at the front of your home, but the bedroom at the back will only hear a faint echo. A standard router works in a similar fashion, and its signal will depend on the distance between it and the devices.

However, if you were to place a speaker in each room in the house, everyone could hear the song perfectly no matter the location. This is how Mesh WiFi works, with multiple nodes installed around the home, so you get solid coverage throughout the house.

Each additional node finds the best channel and path to wirelessly connect to all other ones, creating a seamless and reliable WiFi connection throughout your entire home.

These nodes are essential in efficiently delivering WiFi signals, as each node supports all other nodes in the system. Even nodes that are furthest from the router can still deliver a strong signal. Nodes communicate with one another to determine the fastest band for your devices and to reroute traffic in the event that one node fails – often referred to as “Self-Healing” technology.

With seamless roaming, you only have one network with one name and password—that means that as you move around your house, you’ll never have to switch from one network to the other manually. So go ahead – stream video in the living room, move over to the kitchen, and then the bedroom without worrying about buffering or a dropped connection.

A modular mesh WiFi system is flexible and scalable, allowing you to expand your WiFi without the need to add range extenders – known to have performance and ease-of-use issues. With modular mesh systems, you can place additional nodes anywhere in your home based on which rooms need the coverage. If you want to extend the signal, you simply need to just add more nodes to your system – it couldn’t be any simpler. 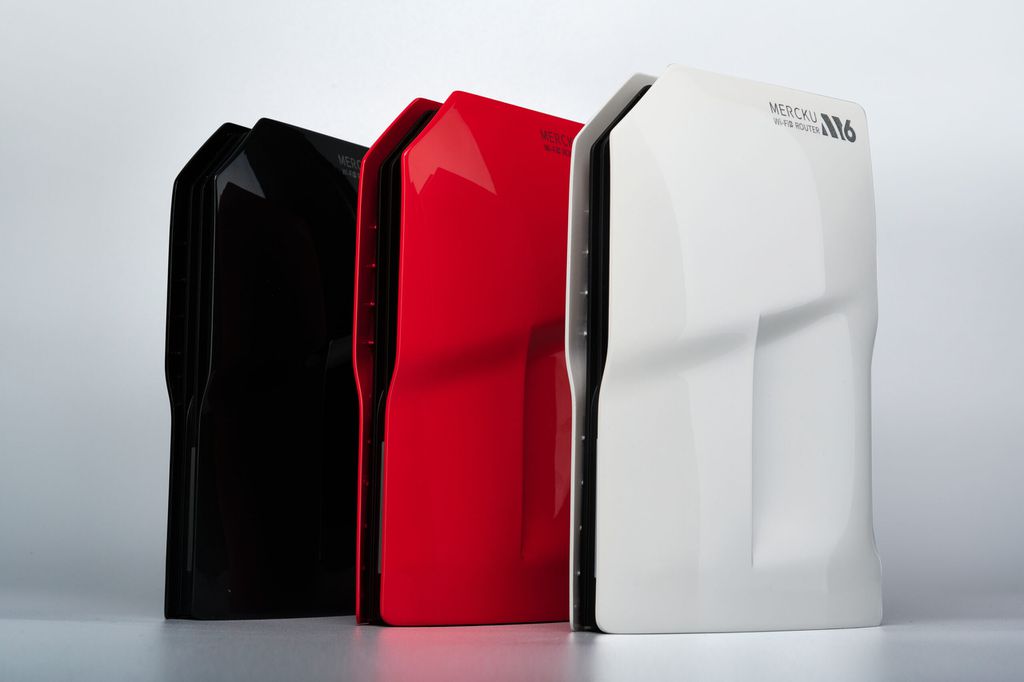 Easy guided set up and management

Mesh systems, like the Mercku M6, often use a Mobile App for a guided setup. The app walks you through the setup process for optimal placement of nodes throughout your home. The Apps also incorporate some handy features to help you manage your WiFi – sharing access with new users, changing passwords on the fly, setting up parental controls, device prioritization, guest access, and much more.

The standard WiFi routers are often oversized and unsightly, requiring extra space to extend the antennas and creating a mess of cables. Homeowners most often attempt to disguise them, hiding routers in the closet or behind the TV, which only serves to reduce their wireless network performance.

Top Mesh WiFi devices, like the Mercku M6 or M2, are designed to have a much smaller footprint in your home, and actively reduce clutter. You can leave them out in plain sight without worrying about them becoming eyesores because their home-friendly design is unobtrusive enough to blend in with the rest of your décor.

¿Why do not use a range extender?

Range Extenders (also called Repeaters), work by receiving wireless signal and rebroadcasting it – cutting the network performance in half.

Range extenders require you to sign on to a new network manually in order to maintain a strong connection once you’re far enough away from your router.

Mesh technology is meant to cast the strongest WiFi as you’re roaming room to room.

Mesh WiFi is faster and more efficient at delivering a WiFi signal than a range extender. This technology has grown quickly and has been the go-to for WiFi routers for its long-range signal, ease of use, and quick setup.

Range extenders are certainly effective when it comes to increasing the range of your router, but they do so at the expense of WiFi performance, which gets cut in half.

In a large space where WiFi struggles to reach every corner, a range extender can actually diminish the overall performance of your network, creating a bottlenecking effect. You might also experience connection issues when jumping from the router to the extender because you’ll need to switch networks manually.

For example, even when standing next to the range extender, you can still experience dead zones or slowdowns if you haven’t manually changed your device over from the router’s signal. These two separate networks also have different names and interfaces, which can be a serious hassle.

Mesh WiFi - Everything will now be within WiFi boundary

Mesh WiFi is built for all types of homes, especially mid-size and large homes that suffer from weak WiFi coverage. Usually, when experiencing dead zones or slow WiFi, you might opt into a range extender but realize that it doesn’t provide you with the fastest speeds or connectivity throughout your home.

This is where Mesh WiFi takes the stage as they are built to fully cover large homes up to 600 sq. meters, with two stories or more, interior brick walls, or an unusual layout.

Having a large area to cover with WiFi or several people to provide WiFi with, a typical router will face issues with meeting the requirement of providing internet access to all devices like phones, computers, or TVs. Mesh nodes will eliminate this issue and connect more smart devices simultaneously without compromising on performance.

Want to learn more about WiFi?